Give Me The Stake -- I'll Kill The Fucker 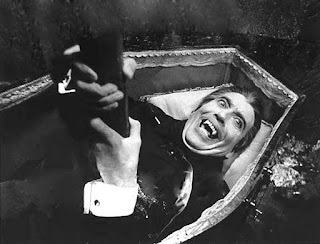 I was waiting in a lobby recently and was glad to see a Rolling Stone magazine, like an old friend. The magazine gave us Hunter S. Thompson in its’ heyday, and I have a soft spot for culture-critique. But the mossy old stone isn't exactly rolling, and I was amazed at how oblivious to reality the magazine seems to be.

A single page of this issue, dated Nov. 24 2011, demonstrates the paradigm-shift underway, so painful to the old guard. I ripped it out thinking I might expand my reaction to it into a blog entry, so here goes.

First is “Rock Radio Takes Another Hit” by Steve Knopper, which basically laments the decaying cultural idiom. Apparently Clear Channel, which owns 850 stations in the US “cut hundreds of jobs” in a belt-tightening move. Local radio ‘talent’ is being replaced with syndicated ‘talent’ like Billy Bush and Ryan Seacrest or the ‘Big D and Bubba Show’.

Which is lamentable, I suppose. The Clear Channel spokeswoman said “…it’s about efficiency and giving our listeners what they want.” Indeed. Why have a DJ in every town when one can do the trick? The article goes on to lament the firing of long-time LA rock DJ Jim Ladd, who says “It’s really bad news… the people programming stations are not music people --- they’re business people.” Major stations in Chicago and NYC switched their formats from rock, “leaving those markets without a single major outlet to break rock acts.”
Well Steve, here is the worlds’ smallest violin... The author is not decrying concentration of media ownership among a few companies. It's about those poor poor rock stars (and the DJs and writers who earn(ed) their living feeding on the corpse).  Which brings me to my real point—who needs rock radio anyway? The only radio programming I listen to at all is NPR, and I live for new music. Old dinosaurs die hard. Rock has been on life-support for years. Give me the stake...
I’ll be sad when I don’t have the hoary old magazine to kick around anymore. But does anyone think that music will suffer without new rock acts or rock radio?  Knopper then gives us this gem; “Even proven hit-makers, from Red Hot Chili Peppers to Coldplay, just don’t get enough spins on the limited number of radio stations to break a (new) single.” Leaving aside the apparent falsity of this statement, are we supposed to feel sorry for these corporate mega-rockers? My god man – get real. It’s like complaining that you can’t even fly your friends to the Superbowl without looking like some kinda goddamn bum because the seats in your airplane are ripped.
The out-of-touch hubris of the piece maxes out with this closing quote from Bob McLynn who manages Fall Out Boy and Hole (ugh) among others; “Some of the biggest rock markets in the country have no rock radio. How are people going to find new acts in these markets?” Ever heard of the internets?
Post Script: In 1996 the US instituted the Telecommunications Act and de-regulated ownership of radio and television stations. Previously fears of consolidation of ownership had caused regulators to block the conglomeration that has taken place since 1996. Today, two companies, Clear Channel and Viacom, command 42% of the radio audience and 45% of industry revenues. They are attempting to pull the same shit on the internet. TURN OFF YOUR RADIO.
http://futureofmusic.org/press/press-releases/commercial-radio-station-ownership-consolidation-shown-harm-artists-and-public-
Posted by anothercountyheard at 3:18 PM