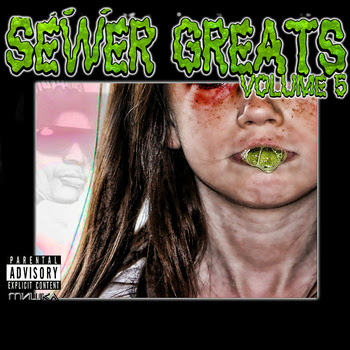 The new album from internet label Sewer Greats is the fifth in a series of free compilations they have released on their Bandcamp. The label is centered loosely on the post-witch house scene, but each issue in the series has had a slightly different theme. They’re all worthwhile though I wasn’t crazy about the R&B flavored #4. This issue is a major work: the theme is rap. Each of the 26 tracks features rapping of some type, but it’s the swagged-out fringe of post-Kreayshawn / Gvcci Hvcci rap. The material ranges from the sublime to the ridiculous, and sometimes is both.

Dolo Gang$ter -"Fuckt Up" is a good example: the refrain is “I love to get fucked up / everybody get fucked up / drank drank dat liquor / smoke smoke dat weed”, absurd when viewed as lyric content. Yet the street authenticity is undeniable, and the music behind this lyrical exercise in reducto ad absurdum is one helluva track, combining jazz samples and drag technique. This level of quality is the rule, not the exception on this carefully curated comp. Main Attrakionz’s “Chuch” is one of the best tracks here, a good example of their own brand of chill-hop. Kodak to Graph, kitty pryde, Bobbi Dahl, Michael Myerz -- all contribute interesting tracks. There's not a single track I skip when playing this.

Most feature provocative lyric content, and I can already hear the sanctimonious scorn of the ‘enlightened’ reacting. “If you’re a thoughtful person – how can you sanction this debased degenerate culture?” Attempts to make art serve some kind of social good usually results in the opposite, as in the case of nazi Germany, or in artless shit. Socially conscious hip-hop is virtually non-existent.

Or is it? The irony is that taking lyrics to this extreme of sex and drug obsession does something to highlight the inherent absurdity and throws into relief something that is almost irrational. Maybe following a thread through to its’ logical conclusion is a way of exorcising certain ills, of ‘working it out’. There is something undeniably valid about this music, more because of the debased content than in spite of it. This music is far more ‘real’ than what passes for hip-hop these days. It forces the audience to confront the dreams and nightmares latent in suburban ghetto bedrooms, and a society freed of the restraints formerly imposed by Christian morality. And that’s thought provoking. Sewage Tapes Facebook
Posted by anothercountyheard at 12:52 PM