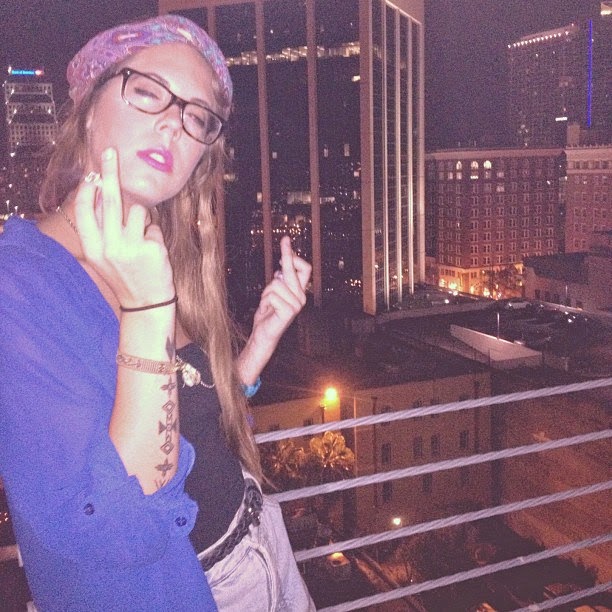 Sometimes when my vision contracts I wonder if this tiny community of hipster internet geeks sharing each others music isn't really just a glorified circle jerk; a self-congratulatory circular feed-back loop, the participants of which imagine is somehow the center of the cultural universe. And then along comes something so legitimate, so underground and fresh, that it completely restores the conviction that this cultural nexus, the DIY-internet-underground-music-scene, really IS the top of the cultural pyramid. It's everything mainstream culture isn't; authentic, organic, innovative and dynamic.

Calling this a 'mixtape'  modestly eschews the pretensions of a 'debut album', but IDK I'M HAIGH is a debut as self-assured and confident as any I've heard.  Mona Lisa is the triple threat; a rapping singer songwriter with a gift for hooks and a flair for production. Think Kitty Pryde meets Panda Bear. Despite each track having its' own producer, they are all indelibly stamped with Mona Lisa's unique vocal tone and fully developed vocal arrangements that elevate them to the status of songs.  IDK is indisputably her album.

While Mona Lisa is a rapper, the songs do not sit comfortably in any established microgenre, and clearly transcending the narrow limits of  cloud rap.  IDK contains elements of trap, witch house and, most interestingly, dream pop, but fused into a coherent synthesis of just about everything going on in net music.

The album flows nicely. The "IDK I'm High" motif is woven into many of the tracks, and the dreamy vocal arrangements reinforce the thematic unity of the set. Three of the songs  deserve special mention. "Nice Boys" is a bona-fide pop hit. Producer Lautlos provides  a spare, shimmering bed over which the three rappers deliver a hypersexy, femmed-out paen to hetero-norm relationships. Guests rappers Babeolf Hitler and Brooklyn White (who also did the cover art) step up with some seriously dope verses. The Shisa-produced "CTRL + ALT"  is instantly addictive, its' cartoonish twee vocal hook sticking in your head like gum to your shoe. "System e r r o r",  with its' basic track by d0lphin sp,  is a  vocal tour-de-force, with beautifully blissful  vocal loops swirling,  as Mona Lisa sings an amazing and emotional song with almost a rock sensibility,  even while rapping some of the verses. The result had me standing on the roof fist-pumping again, which I haven't done in a while; a perfect fusion of dream pop and trap.

Mainstream "artists" like Katy Perry and Miley Cyrus enjoy access to the best songwriters, first class producers, and the best of everything,  but all the money in the world can't  buy the artistic legitimacy or substitute for the authenticity of real teenage street-swag.

With other great tracks by fellow Florida producers Miles Farewell and ZDG, Houston's SHMX,  4llsouls of the Netherlands and TRAP DANiEL$.

Posted by anothercountyheard at 2:26 AM