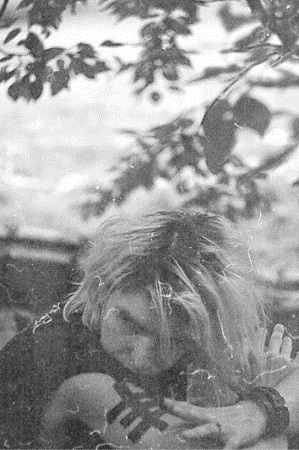 Too much chill  makes Jack a dull boy, so how about a little of the evil-mean-wicked-nasty as an antidote ? Paul Von Aphid of  Modern Howl (Aural Sects, Phantasmadisques)  has a new solo project called Zex Model, which has just dropped an EP that's a perfect antidote to too much EDM conformity in the DIY scene. For the unacquainted, this is the hard outer edge of post-witch darkwave, emanating from Kalingrad, where Aphid abides.

Zex Model is not going to be for everybody. This is some red-pill shit, and most will  prefer the blue pill, especially chillwavers. But there are  those for whom the light is but a foil to set off the darkness, and that, they will find here, in spades.

First Mutation is an upfront homage to  mid-eighties Industrial dance music, one of Von Aphid's musical obsessions. Before there was Nine Inch Nails, there was Cabaret  Voltaire, Coil, Front 242 and Ministry, and a whole sub-genre flourished in the dark dance underground. Industrial dance combined the techniques industrial music, derived from Throbbing Gristle [the genre 'industrial' is named after their record label], and  synth-driven dance music of the Depeche Mode type. This weird hybrid ruled the dance underground in the mid 80s, with labels like Wax Trax dominating US and European underground  charts, and  found lasting influence and commercial success with Skinny Puppy and NIN.

This music is hard and dense. The layers of sonic disturbance add up to a  sound that is delirious and disorienting, thought provoking and visual.  Paul's Nivek Ogre-style growling and chanting is washed over tracks that pound with relentless energy. If  you're one of those that does not avert your gaze when confronted with real horror, you'll love this.

With the planet nearing ecological collapse, and the veneer of democracy peeling away in the entirety of Western Civilization, the world is at the end of a cycle. Lift the veil and behold the swirling abyss of ancient evil  binding the earth in it's magic spell.  First Mutation holds up a mirror to an ugly world, and shines light on the soft white underbelly of the beast called Babalon...

You can keep sleeping, and dream, or wake up, and confront the nightmare of the modern world. You might want to to keep some Ambien handy tho.

OUR AIM IS WAKEFULNESS, OUR ENEMY IS DREAMLESS SLEEP - old TOPY proverb.


Posted by anothercountyheard at 11:44 PM